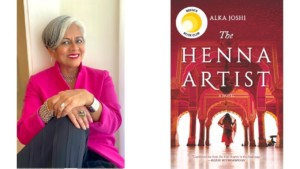 Join us for an evening with New York Times Best Selling author Alka Joshi as she discusses her bestselling books, The Henna Artist and The Secret Keeper of Jaipur. In this interview, Alka will share her inspirations for her work, how her mother’s life story has influenced her writing, and what it’s been like working on creating a Netflix series based on her books and will answer questions from the audience.

Alka Joshi was born in India and raised in the U.S. since she was nine. She has a BA from Stanford University and an MFA from California College of Arts. At age 62, Joshi published her debut novel, The Henna Artist, which immediately became a New York Times bestseller, has been translated into 26 languages, and is being developed into an episodic series by Netflix.