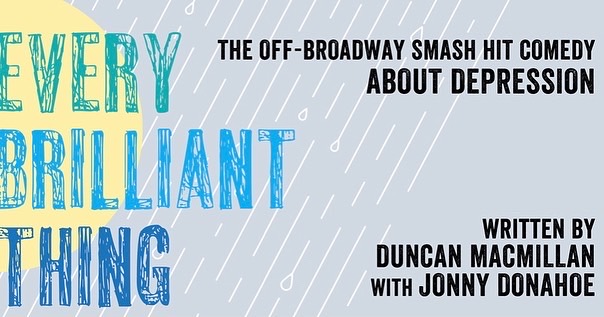 A boy of seven sets out to list every special, ordinary thing that’s worth living for to lift his mom’s spirits: 1. Ice cream. 2. Water fights. 3. Staying up past your bedtime and being allowed to watch TV. As he matures to adulthood, the list grows, and he learns the significance the list has on his own life as he goes to college, falls in love, and builds a home. With that simple premise, the off-Broadway hit EVERY BRILLIANT THING takes the audience on a unique theatrical storytelling experience that is both intimate and immersive, performed as theatre-in-the-round by award winning Dezart Performs of Palm Springs. EVERY BRILLIANT THING is the creative partnership between playwright Duncan MacMillan and actor Jonny Donahoe, and runs April 1 – 10 at the Pearl McManus Theatre.

Dezart Performs is thrilled to bring back the amazingly talente dactor and stand-up comic Joel Bryant in the role of the storyteller. Bryant won the Desert Theatre League Star Award for Outstanding Lead Actor in a Comedy (Professional) in 2019 for his performance in Dezart Performs’ MAYTAG VIRGIN. Deborah Harmon, who also won a Desert Star Award for Outstanding Director of a Comedy (Professional) for MAYTAG VIRGIN, will be directing EVERY BRILLIANT THING.